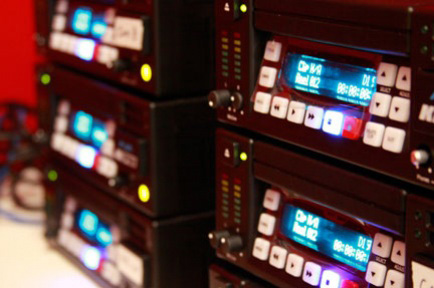 Grass Valley, CA - AJA Video Systems, a leading manufacturer of professional video interface and conversion solutions, announced today that sixteen of their recently released Ki Pro portable video recording devices are being used by the TED Conference to capture video feeds of some of the world’s most preeminent thought leaders. The conference took place, February 9-11, at the Long Beach Performing Arts Center in Long Beach, Calif.

TED Conferences have a history of living beyond the events themselves, with the popularity of their high production value, tightly-edited ‘TEDTalk’ online video series. “In the past, we would take all of the footage we shot during a TED Conference back to our offices in New York, and it would take us at least one month to digitize and media manage everything we captured,” said Jason Wishnow, Director of Film and Video, TED Conference. “With Ki Pro we eliminate the digitizing step, and all of the media management happens behind-the-scenes with Ki Pro and Final Cut Pro during the conference itself.”

The TED conference is made up of 12 two-hour multi-speaker sessions, and as soon as a session is finished, the drives from the ten Ki Pros that sit in a mobile production truck will be taken to an on-site editorial room and backed up. The on-site editorial room houses several MacBook Pro laptops each with a RAID 1 drive. Using the media manager in Final Cut Pro, footage from the live mix as well as all eight ISO cameras, plus a feed of the presenters’ graphics were synced to be re-edited.

Each two-hour session will have 6-7 speakers total, and talks from the most prominent speakers at this year’s TED conference will be edited within hours and published before the conference itself is over. The TEDTalks released online during this year’s conference were from Bill Gates, Jamie Oliver and of a Blaise Aguera y Arcas.

“What we’re attempting to do this year in Long Beach is very ambitious,” said Wishnow. “In the past we tried editing during the conference, but having to pull footage off of 8-10 different tapes, sync, edit and encode them was a logistical nightmare. With Ki Pro the whole process is much more civilized, and we can edit in full raster 10-bit HD 1080 at 24p.”

Unlike other conferences, TED maintains a fully staffed AV event crew and works with professional cinematographers to shoot their talks, and the results are evident in the quality of the footage. “We’re starting to see some of our legacy broadcast customers use Ki Pros to facilitate tapeless workflows for live broadcast events and are very pleased that the TED Conference is adopting a similar workflow. The fact that they’ve entrusted Ki Pro to capture talks from some of the world’s greatest minds, is not only a thrill, but a true testament to the quality, reliability and flexibility of this product,” said Nick Rashby, President, AJA Video Systems.

The AJA Ki Pro is a portable, rugged tapeless video recording device that records high-quality Apple ProRes 422 QuickTime files onto computer-friendly media. Because it features SD/HD-SDI, HDMI, and analog inputs, users can interface with virtually any type of camera they may own or rent. Ki Pro’s numerous simultaneous outputs enable flexible monitoring, connecting to both professional and consumer monitors. Intuitive to operate, Ki Pro’s familiar VTR-like buttons provide immediate controls for basic operation. From a distance, users can control operations with a laptop or iPhone web browser via ethernet or wireless connection.