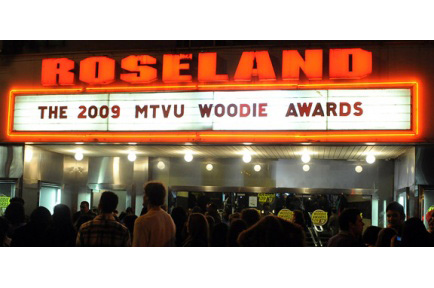 The mtvU Woodie Awards show used Ki Pros as a tapeless replacement for recording all nine live camera feeds in addition to the master program feed from MTV’s own remote truck fleet. mtvU post-production manager James Cohan, technology manager Jim Will, and engineer-in-charge Gaylon Halloway architected a workflow where each Ikegami HD camera that was attached remotely to the production truck fed a Ki Pro unit. The Ki Pros’ ProRes recording allowed mtvU’s editorial staff to remain within their existing Final Cut Pro workflow. This capability gave them direct access to the Apple codec, enabling the show to move immediately into post-production with footage from all cameras and making the program master instantly useable to editors back at MTV - all without touching tape.

By using the digital Ki Pro devices instead of tape-based recording decks to digitize nearly thirty hours of material from ten cameras, the Woodie Awards post team eliminated three hours of tape ingest time, along with the cost of multiple high-end tape decks and staff that would have been required to digitize media overnight.

“Walking away from the show with our edit master in-hand was key. Using Ki Pro allowed us to save time and move immediately into production,” said Cohan. “We sent producers clips before they had even left for the wrap party.”

The tapeless workflow also delivered an unanticipated benefit. Said Cohan, “Because of how quickly the Ki Pro allowed us to get media into post, editors at MTV were able to access the whole show right away, as opposed to a line cut and maybe one or two cameras. This let us bang out selected performances and moments from the show that night getting them on the web by the next morning. In the age of Twitter, YouTube and Facebook, we want our audience to champion our programming and blast it out across the platforms available to them, however it’s critical that we ensure that they’re pushing around the official version.”

Cohan noted, “From the beginning our goal this year was to depart from tape. The Ki Pros weren’t a back-up that we decided to use; they WERE the tape master. If you treat the digital version like it’s going to be the master you can make that leap and free yourself to make bolder decisions. On a smaller postproduction line every budget decision is critical. Ki Pro gave us a huge cost savings that let us put more money into the mix, the graphics, the production - not the technology.”

About the mtvU Woodie Awards

The AJA Ki Pro is a portable, rugged tapeless video recording device that records high-quality Apple ProRes 422 QuickTime files onto computer-friendly media. Because it features SD/HD-SDI, HDMI, and analog inputs, users can interface with virtually any type of camera they may own or rent. Ki Pro’s numerous simultaneous outputs enable flexible monitoring, connecting to both professional and consumer monitors. Intuitive to operate, Ki Pro’s familiar VTR-like buttons provide immediate controls for basic operation. From a distance, users can control operations from a laptop or iPhone through a web browser via ethernet or WiFi.