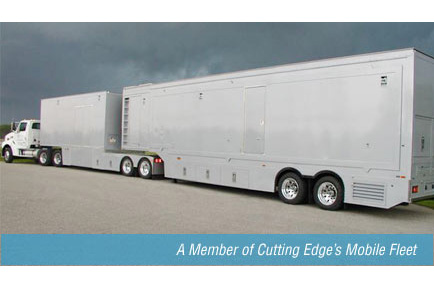 KONA 3 and Io HD for Film and TV
In addition to owning 74 Avid systems for both rental and in-house use, Cutting Edge maintains 14 Final Cut Pro editing suites, each outfitted with an AJA KONA 3 card for video capture. These suites are often in use for film dailies where KONA 3 cards are used to capture footage so that it can be transferred to tape, DVD or output as QuickTime. One of the films currently in post-production at Cutting Edge is Baz Luhrmann's Australia. The facility has also completed a number of television commercials with director Mark Toia for Griffith University, Holden Colorado and Soul Pattinson shot with the RED ONE camera, where the KONA 3 card is being tapped to render and play out files to HD tape.

"In addition to our film and commercial work, we use KONA 3 cards in broadcast as a solution to accommodate RTDs (replay transition devices) that allow us to play back HD and SD. We use an Apple XServe with a KONA 3 card to do the real time playback of this video and key," said Burton. "Our Digital Media Production Suites employ KONA 3 cards as part of the production pipeline for motion graphics and presentation materials."

Cutting Edge also taps the AJA Io HD for remote editing scenarios. "We have an Io HD that we use when we need a quick set up of an edit suite, and with a laptop, a copy of Final Cut Pro and the Io HD, we have a very portable and robust editing suite. When there is that last minute requirement, this is a solution we can put in place very quickly."

Flexibility with AJA FS1
Cutting Edge recently purchased 14 AJA FS1s for use in their mobile production trucks, the largest HD fleet in Australia. "In outside broadcasting you need the flexibility to be able to convert HD to SD, analog to digital and work with various aspect ratios. We found the FS1 is an invaluable all around tool, and each of our trucks has multiple FS1s that serve as the equivalent of a Swiss Army Knife for broadcast production," Burton continued.

Cutting Edge's mobile fleet covers AFL (Australian Football League) for Network 10, Cricket coverage for FOX Sports and a variety of live venue and special events. "There are a number of cheaper solutions on the market, but none of them come close to AJA products when considering stability, reliability and depth of feature set," concluded Burton.