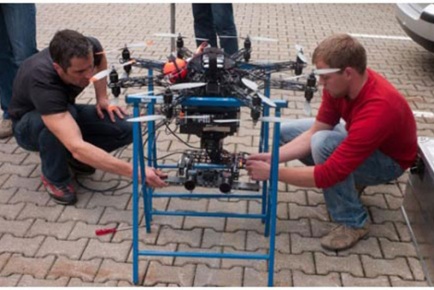 To capture the spectacular imagery of the brothers in motion, 3D film production company Virtual Experience created a unique stereo rig comprising a sinaCAM 3D camera from Anadicon and Solectrix and AJA Ki Pro digital recorders, along with additional stereo gear from P+S Technik. Virtual Experience also equipped a remote-controlled helicopter with the sinaCAM and two Ki Pro Mini digital recorders to capture close-up stereo footage of the climbers at extreme heights.
"For this movie we were shooting outside in the sun, so we had bright light on one side and shadows on the other. With such a large amplitude of exposure, it was absolutely required that we record in 10-bit," said Alaric Hamacher, Virtual Experience's stereographic guru. "We had to record two streams at the same time and synch playback for 3D. We wanted to use a high-quality codec, and Apple Pro Res 422 HQ met our needs perfectly. Finally, because of the economics of broadcast production, we had to keep costs down. AJA Ki Pro was the best solution. It gave us the capability, quality and cost that we needed."

For 75% of the production, footage was captured with the sinaCAM onto two AJA Ki Pro recorders. Hamacher built a recording system that he operated remotely via laptop and programmed a simple software application to start both Ki Pros in synch and synch playback.

"I love the functions that let you control Ki Pro over a network. Remote control via the free AJA Ki Pro Automation software is a very important feature because it allows you to customize how you use Ki Pro. It's also well documented on the AJA Ki Pro support page. Within a day or so we were able to program the software we needed for 3D just with that resource," he said.

Virtual Experience also worked with Anadicon, one of the developers of the sinaCAM, to mount the camera and two AJA Ki Pro Mini recorders on a small remote-controlled helicopter. "Ki Pro Minis were ideal for this rig because of their size and weight - the whole thing weighed less than 2 kilograms," said Hamacher. He constructed a special set of batteries and system power to meet the helicopter's weight requirements and mounted the Ki Pro Minis on the far sides of the helicopter with the battery in the middle. The mini helicopter made a series of 7-minute flights in one day of shooting, recording approximately 40 minutes of footage (20 minutes each left-eye/right-eye).

The production was edited on Avid DS in Apple Pro Res format. Hamacher and Virtual Experience have been doing 3D productions for ten years, and have built expertise in adapting existing 2D production solutions to the needs of stereographics. "Specialized 3D gear tends to be expensive, closed technology. We find that we have a better experience and realize better economics if we use solid 2D tools and make good use of them," he said. "That was definitely the case with AJA Ki Pro. It delivers 10-bit media -- better quality than some equipment that is much more expensive, and it's flexible so that we were able to control it remotely with software that we built very quickly. The way Ki Pro works enables users to get the most out of the equipment."

About Virtual Experience
Alaric Hamacher graduated in directing and producing from the Academy for Television and Cinema, Munich and holds a MA in Film Sciences from Paris VII. He was responsible for feature film coproductions at Advanced Media AG in the late 1990s, before setting up his own production company Virtual Experience in 1999, specializing in stereoscopic 3D productions. He recently supervised the stereoscopic production of the mystery thriller "The Forbidden Girl" and the first award winning 3D production of the German broadcaster ZDF "The Huber Brothers." He has directed stereo 3D on many 3D commercials and corporate movies for clients including Mercedes Benz. Alaric Hamacher is spokesman and board member of the European Union of 3D Professionals (UP3D). www.virtual-experience.de