Talking HDR Production with dock10
As the UK’s leading television facility, dock10 brings some of the country’s most beloved programs to life, spanning prime time episodic series, sporting events, commercials, and corporate films. While each dock10 production is unique, a robust technology pipeline sits at the core of every project. We recently chatted with longtime dock10 Duty Technology Manager Michael Lodmore to get an idea of how the company has evolved in the last year, and the approaches it’s taking to advance production quality across projects.

How did you get started in the industry and what do you love most about what you do?
I trained at Ravensbourne College in the late 1980s, then joined Mersey TV as a trainee vision engineer, progressing through the engineering department as a maintenance engineer then project engineer. I then worked for a TV shopping channel and travel channel before joining ITV as a Transmission Operations Manager. Following six years in that role, I joined dock10 as a Duty Technology Manager, where I’ve been for the last 10 years. The thing I love most about my job is the various challenges that each day brings and the fact that I get to watch a lot of sports whilst being paid!

What are the main challenges that you face at dock10 today?
The global pandemic has certainly introduced a range of challenges, including a heightened demand for remote editing and production. In the last few years, we’ve worked hard to provide that for our clients, and now it’s firmly part of dock10’s offerings.

Tell us more about a recent production on which you’ve worked.
One of our major clients, BBC Sport, opted to produce coverage of the 2020 UEFA Football Championship that ran this past summer remotely. To facilitate the production we took UHD HDR feeds of the games and integrated local studio 3G SDR content in our virtual studio to produce simultaneous live UHD HDR and HD SDR feeds for transmission supporting a range of device types. We also had to add UHD signal processing for the first time – for which we used AJA FS-HDRs. Although our facility is 3G ready, this project marked the first time that we had done a 3G studio production for a client. 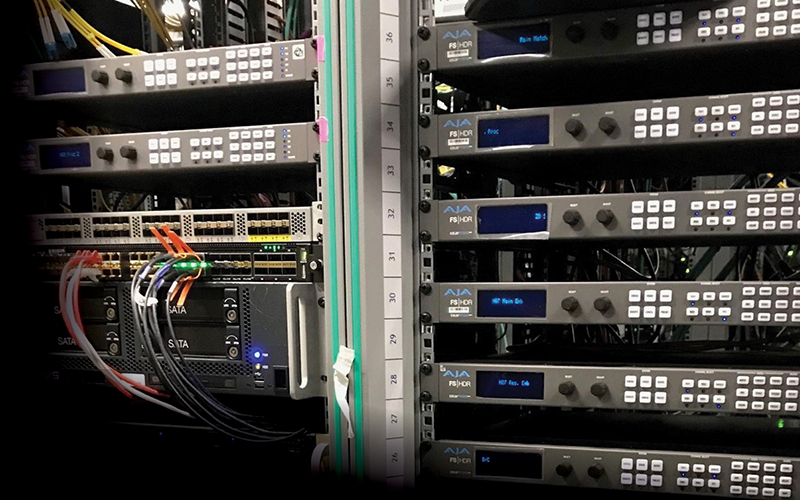 What role did FS-HDR play in the production?
We initially looked at the FS-HDRs for their LUT processing capabilities, but quickly started using other features such as frame synchronization and audio processing, which in the end, saved us from purchasing or renting other technology to do these tasks.

We first received live match footage in UHD HDR, which we then synchronized and down-converted for monitoring using several FS-HDRs. They also helped us with UHD HDR to UHD SDR conversion to feed backgrounds to our virtual studio system, MADI embedding, and UHD HDR to HD SDR down conversion for transmission.

As the venue audio came to us via a different route than the venue pictures, we also tapped the FS-HDR’s video delay feature to match lip sync. What’s more, for UHD HDR to SDR and UHD HDR to HD SDR conversions, the FS-HDR’s LUT conversion was paramount. Our colleagues in BBC R&D, who had extensive experience with LUT conversions, helped to ensure we could produce the best possible conversions, whilst preserving the color rendition of camera pictures and graphics.

How many FS-HDRs did your team use?
We used three FS-HDRs that we own, but hired in an additional six for the Euros production from Broadcast Rentals in the Netherlands. In addition to FS-HDR, we also used AJA Corvid 88 video I/O cards, which reside in our virtual studio render engines.

What industry trends are you following and why?
While I feel like we’re still a little way off from being ready to start using them on a large scale, I think IP video and audio processing and virtualized/cloud systems are promising. Both offer undoubted flexibility.