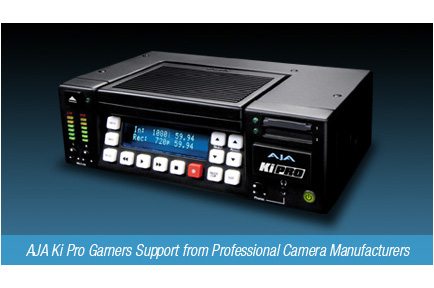 Ki Pro records files to the Apple ProRes codec directly from camera, allowing filmmakers, broadcasters, video professionals and prosumers to skip the process of re-rendering to an editing codec by giving immediate access to 10-bit full raster edit-ready ProRes files. Ki Pro was introduced today, and will be on display at the AJA Booth (SL2513) during the National Association of Broadcasters (NAB) Convention at the Las Vegas Convention Center from April 20-23, 2009.

"We are really excited about the potential of Ki Pro to streamline decision making on-set and in postproduction. Coupled with the Full HD output of the ARRIFLEX D-21 camera, the Ki Pro provides direct transfer to a ready to edit format. Using Ki Pro with an Apple Final Cut Pro workstation on set, the production team can have instantaneous real time playback for take selection,” said Adrian Widera, Key Account TV International, ARRI.

“A big part of the RED ONE’s success in the cinema and television markets, is the combination of stunning 4K images along with flexible and logical post production solutions” said Ted Schilowitz of RED Digital Cinema. “The ability to record ProRes directly from the live HD videotap output from a RED ONE on a small portable device, while capturing the 4k REDCODE raw on the camera is a big deal. And I probably don’t even need to mention that because it’s an AJA product, it will no doubt hit the legendary quality and top notch level of support that industry pros have come to count on every day on the job.”

“Ki Pro fills the gap between camera acquisition and post production, giving filmmakers and video professionals instant access to their material,” commented Nick Rashby, President, AJA Video. “It’s extremely gratifying to bring this product to market with the support and enthusiasm of companies such as Apple, ARRI, Canon and RED.”

Ki Pro provides a new way of connecting production and post with its extensive analog and digital connectivity; virtually any video and audio source can be fed into Ki Pro to record pristine 10-bit ProRes media that is then immediately available to edit within Apple’s Final Cut Studio. Ki Pro will allow users to record hours of pristine ProRes media to a removable storage module with built-in FireWire 800, or to 34mm ExpressCard Flash, for immediate editing and file access. The unit can connect to any digital camera via SDI or HDMI, or any analog camera with multiple input options. Ki Pro is priced at $3995 US MSRP and will be shipping in June of 2009.