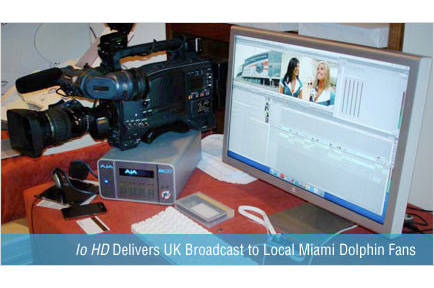 AJA Video, a leading manufacturer of professional video interface and conversion solutions, delivered an Io HD to the Miami Dolphins to facilitate a remote HD editing solution during the team’s recent visit to play the New York Giants at Wembley Stadium in London.

Brendan Nieto, Senior Manager of Production and Programming for the Miami Dolphins credits the Io HD with enabling the team’s Miami-based fans to view the London game and events. “The best thing about the Io HD is that I got it, plugged it in and it worked—it’s really as simple as that. We would not have attempted to do this sort of live, quick turnaround HD production before the Io HD. The Varicam, a laptop and an Io HD are all you need to get the high quality results that previously demanded much larger, more cumbersome and more expensive solutions.”

Nieto heads up the production of all of the Miami Dolphins’ HD material for the stadium video boards, the team website and a local broadcast network. The London game was particularly exciting for the team as it was the first in-season game ever played outside of the United States. Nieto needed a mobile HD editing system to take along on the trip. He wanted to get HD video into an Apple MacBook Pro laptop from various professional cameras including the Panasonic P2 enabled cameras and the Panasonic Varicam at the event. Nieto took HD SDI video straight out of the Varicam and into Io HD, recording it right onto the laptop’s hard drive using the Io HD's hardware-based Apple ProRes 422 encoding capability.

“With this setup we were able to edit material on the fly, and send MPEG 4 video onto our server so that local fans could watch our features at a viewing party on the High Definition Daktronic Video boards at Dolphin Stadium in Miami,” Nieto explained.

The Miami Dolphins are a longtime AJA customer, with several KONA LHe cards in their studio, based out of the team’s training camp facility. “AJA is a great company to work with and are one of the better vendors out there when it comes to video—their products work well, they do what they’re supposed to do and the company support is unsurpassed,” Nieto concluded.