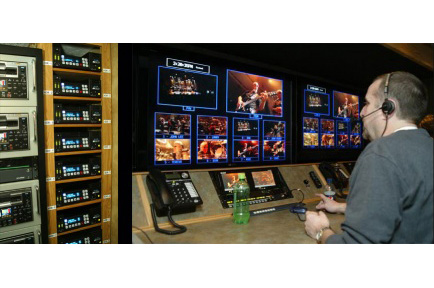 If you pool the experience of the six Nashville video production pros who founded Camp Digital you get a team that's been rolling in music and entertainment for a combined 100 years. Based in country music's heartland, Camp Digital was formed in 2007 to create a mobile production solution designed specifically to capture live music and entertainment events for television, DVD and online/mobile media.

AJA solutions -- particularly, the Ki Pro portable digital disk recorder, turned out to be a key element in getting their new business model moving.

"At that time, there weren't many HD trucks available except huge 53-foot trailers that needed to be all things to all people -- to accommodate everything from the Superbowl to the Grammys to NASCAR," said Camp Digital co-founder Tom Gregory. "Music and entertainment doesn't require all of the slo-mo devices and heavy graphics gear those trucks have, but you still have to pay for it."

Since the big trucks were often cost-prohibitive, Gregory and his fellow pros might opt for flight packs, which presented a different problem. "Flight packs aren't conducive to a creative environment. You never knew where you'd be set up. Maybe in a bathroom or a closet. You'd have eight or nine people crowded around two monitors."

So Gregory and five like-minded pros banded together to build exactly what they needed to 'camp' at events and performances and capture or produce spectacular HD media using the right tools for music and entertainment, in a working environment that would be consistent from job to job. Camp Digital -- a production company, a vehicle and a new approach to mobile production, was formed.

In equipping its first 32-foot vehicle, Camp Digital focused equally on audio and video. 'Journey HD' included eight Sony HDC 1500 cameras, supported 64 tracks of Pro Tools audio, included two AJA FS1 universal converters and eight AJA Hi5 HD-SDI/SDI to HDMI video and audio converters. "We were in a more confined space, so we had to be conscious of rack space and weight. AJA's products were ideal for that environment," said Gregory. Journey HD was also equipped with 8 Sony HDV VTRS.

"It became apparent to us toward the end of our first year that the bigger production companies saw our ability to record only in HDV as a limitation. We had the granddaddy of cameras recording to a less-than-optimal medium. It took us out of the running for some jobs."

When AJA introduced the Ki Pro, a portable tapeless digital disk recorder in 2009, Camp Digital's local supplier, M-Bits, thought it might be a good solution for them. "We knew from our size, weight and budget parameters that we'd never be able to replace eight VTRs with eight HD CAM decks. There'd be no room. It would be a huge investment. Size and price-wise the Ki Pro fit all of the requirements."

With M-Bits' help, Camp Digital hosted a Ki Pro demonstration and brought in 30 clients and prospects. "It became apparent within the scope of that meeting that we could get a lot deeper into the client pool if we were to embrace that technology," said Gregory. "Our three biggest clients were Final Cut users and we were thrilled about the immediate access to ProRes files from the Ki Pro. The clincher was, one of our biggest clients looked us in the eye and said, 'You guys buy this and you'll get a lot more of our business.'"

Camp Digital purchased eight Ki Pros and put them into service the day they arrived, installing them during the setup for production on The Colgate Country Showdown, a live event hosted by Leann Rimes shot over a 2-day period in Nashville. The show was nationally syndicated. "The Ki Pros came out of the box, we connected them and hit record," said Gregory. "AJA products are absolutely bulletproof. We had confidence."

That night, after the Colgate show finished, the crew packed up the camper and trucked overnight to the Country Crossings Music Festival where they recorded twenty bands over three days -- more than 90 hours of content -- to the Ki Pros, transferred the media to four 4TB drives and handed them to the post house the following Monday morning.

"The post house turned around to their client and said, 'These guys just saved you $15K in cost and over 100 hours in digitizing time!' It was a very big deal. The Ki Pro gives clients huge budget relief. We let them know that what they save with Ki Pro can cover crew costs for the shoot, or that it can potentially cover the cost of a color pass. We tell them, 'Put your money on the screen, not into digitizing time.'"